How To Price Contracts Using A Net Margin

Are you tired of working for wages in your building company? Or worse, getting to the end of the job only to find out you’ve lost money?

A few years ago we held an event in Sydney, Australia for custom home builders.

We regularly hold these events as it gives us a chance to meet builders face-to-face and get to know them a bit better.

The evening starts out with a few drinks and a bite to eat, followed by a presentation covering what’s working now for custom home builders and ends with an opportunity to become a member of the Association of Professional Builders.

During the drinks and canapes session our Cofounder Russ was chatting to a custom home builder called Nathan who was pretty well established. He’d been operating for over three years and had grown his revenue to $3m a year.

He was pretty comfortable with what he’d achieved and didn’t feel he needed help at this stage, but he thought he would come along anyway just to see what the APB was all about.

The Business Was Still Losing Money After Adding A Markup

During the presentation Russ could see he was taking plenty of notes so he felt good that even if he didn’t feel membership was right for him at this point, at least he appeared to be getting plenty of value from attending.

As the evening wrapped up, the builders that wanted to join the APB came to us while Nathan and his wife slipped out through the exit.

Russ remembers thinking he would have liked to have said goodbye and thanked them both for coming. So he made a mental note to reach out the following day to see if the information had resonated with them both.

By the time we’d finished signing up all the new members it was getting late.

However, as we left the room we saw Nathan and his wife waiting patiently outside.

He thanked us for inviting him and went on to apologise for not being in a position to join the APB.

Before we could react, he laid it all out for us…

Despite bringing in $3m a year in revenue and adding a 25% margin to their jobs, they had no money. Things were getting desperate and they couldn't figure out where it was going wrong.

Nathan told us that his running costs were only around 10% and although he was adding 25% margin to his jobs, he reckoned he was probably clearing 20% after cost overruns and unforeseen items.

So in theory he should have been making $300k a year net profit on top of his wages, yet everyday they faced constant cash flow problems trying to keep the jobs moving forward…

We could see in his eyes that he was desperate for answers.

He said, “I’d like to sign up today, but I can't because I’m so tight on cash, I just need to get another job going and I’ll get started.”

This is a sure sign that a custom home builder is in serious trouble...because chasing revenue to fix a profitability problem rarely ends well!

The Hidden Costs That Exhaust Profits

We explained to Nathan that although we couldn't do anything right now, we would organise a meeting with one of our coaches who could take a deep-dive into what’s happening and see if we could give him some pointers as to how to fix it.

Two days later one of our construction financial experts was analysing what was happening in Nathan’s business in an attempt to figure out how $300k in net profit was disappearing every year.

The first thing they looked at was the fixed expenses.

At 10.7% of revenue they looked to be well under the industry benchmark....However, there was no mention of Nathan or Karen's salaries.

And when we added their salaries into the fixed expenses, the figure came out at 14.7% of revenue which is around the industry benchmark.

Next, we looked at the gross profit, and that was only showing 14.2% rather than the 20% margin that Nathan was expecting to clear after initially adding 25% and then taking into account cost blow outs! All up, this resulted in a net loss of $15k for the year instead of a $300k net profit.

There were three major problems going on here.

The first was in the way Nathan was calculating his gross profit.

What he was doing was adding 25% to his cost of sales and then treating it as a margin.

So on a turnover of $3m, Nathan believed he was making $750k in gross profit.

However, adding 25% to your cost of sales is a markup, which means the margin on a 25% markup is actually just 20%.

In order to achieve a 25% margin, Nathan needed to be marking his jobs up by 33.3% which is the industry benchmark for new homes.

But that wasn't the only problem, because his accounts were clearly showing a 14.2% gross profit margin which meant Nathan was losing another 5.8% of his profit in cost overruns!

And because he wasn't comparing his actual costs with his budgeted costs, he had no idea that those small cost blow outs accounted for $174k over the course of a year!

The end result was that instead of making $750k gross profit from $3m in revenue, he was only really making $426k.

And that would have been okay if his expenses were as he believed, around 10%, or $300k.

But because he didn't include his salary in his fixed expenses, and instead followed his accountant's advice to, "Just take the money out and I’ll sort it out at year end," which still hadn’t been done by the time we looked at the accounts nine months later, Nathan did not realise he was running at a loss!

You must include your salary in your fixed expenses!

Even if it’s just a journal entry in your accounts…

We’ve seen so many builders run into trouble when they draw on a loan account instead of recording their salary as proper drawings because they forget to include the number in their budget, which means they think they can sign contracts on a lower margin than is realistically possible.

So once we fixed that up and added in the $80k salary that Nathan and his wife Karen were drawing in order to live, along with the tax liability and superannuation payments, the real fixed costs for the company came out at $441k which was 14.7% of revenue.

What It Can Cost You If You Mistake Markup & Margin

When Nathan realised he was only making 14.2% on his jobs and his building company was costing him 14.7% to run, he got angry.

Angry with himself for allowing it to happen, angry with his clients for taking advantage of him and angry because no one had ever taken the time to explain to him how he should price his jobs.

But then he became determined.

Determined to charge a fair price for the service he was providing instead of giving it away for wages...

How Knowing Your Numbers Affects Your
Decision-Making

And eventually he became confident. 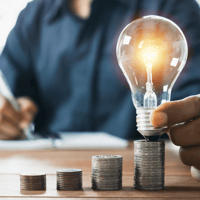 Because once he realised how much profit he needed to add to every job in order to create a profitable building company...he started to value himself and his time.

And that was the biggest transformation in Nathan...and we’ve seen it in a lot of other builders as well.

The Value Of Knowing Exactly What You Should Charge

That happened two and a half years ago.

So he’s still not quite hitting the benchmark of 10%, but he’s confident of reaching 12.5% net within two years, which on the $5.5m turnover that he’s currently enjoying, will result in a $700k net profit for the business on top of the $180k which Nathan now pays himself.

Not too bad for someone that left school at 16!

So that is how we solved the mystery of how 10.8% of gross profit went missing in a builder’s accounts.

How You Can Get Started

If you find yourself feeling alone in your building company, struggling to come up with all the answers to the challenges your team face every day...

We’re here to help you.

So we've created a free checklist for understanding construction financials.

Download it now to discover the most important numbers in your building company and how to increase your margin.